Recently I was searching for a reference on the New York Central about “Travel Tailored Schedule Plan”. Could not find anything except the The Pennsylvania Railroad Technical & Historical Society All other years in Pennsylvania RR history are available.
Now, the greatest thing! They cover news about other railroads the PRR once owned or merged with. Let’s start with the reference I was looking for:

Jan. 1, 1956 Perlman changes NYC organization of Transportation, Maintenance of Way and Maintenance of Equipment from its traditional departmental form with vertical lines of authority to line-and-staff system used on PRR…

We are always talking about the “Fabled Rutland Milk”  that went through Troy. But it didn’t stop in Troy? So why is a single milk car (great photo above from JS Horvath) doing in Troy? So what was/is the Dairymen’s League?
Going to blame it on the Delaware & Hudson Railroad.
The D&H negotiated the joint trackage between Mechanicville and Crescent with the BHT&W while it was still separate from the Boston & Maine.The D&H had trackage rights on the Troy and Boston (and then B&M) from Troy to Eagle Bridge. The D&H’s R&W Milk train started from Green Island, crossed to Troy, ran on the B&M to Eagle Bridge, then picked up milk on the R&W (Rutland and Washington, D&H Washington Branch) to Castleton and Whitehall. Then it ran non-stop to Albany with the milk cars to the NYCRR for New York, and… 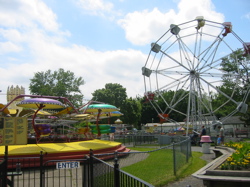 Picture at top: Hoffman’s Playland, an amusement park in the Albany, NY area announced it is closing at the end of the season.  That immediately led to some discussion about a new home for the Ferris Wheel which can be seen from Route 9 as you drive pass Hoffman’s. Some comments suggest Troy and it’s Riverfront Park. A wheel would have historic  ties to Troy. George Washington Gale Ferris a graduate of Rensselaer Polytechnic Institute, designed and built the first Ferris Wheel for the World’s Columbian Expostion in 1893 in Chicago, Ill.

This blog will be a collection of stories, mostly directly concerning the Troy Union Railroad Company, but also the city of Troy too.

Let’s start out with what the Troy Union Railroad looked  like on the New York Central balance sheet and income statement.

One of our fans contacted us about a William Beatty Rochester SR. He was a e President or Director of one of the RR Lines in the 1850/60s. He was the son of Nathanial Rochester (founder of Rochester NY).

Yesterday I got some sad news from our good friend Gino DiCarlo. The little railroad that went up the hill in Amsterdam, New York has lost it’s only customer. The railroad was officially named the Amsterdam, Chuctanunda and Northern Railroad. It is known as the Kellogg Industrial or by CSX Rail as “CP-173 -to- QCG1.60”. It leaves the CSX (with Amtrak) “Chicago Line”, climbs a steep hill, and even has a “switch back”. More details on it later, for now, the loss of THE CUSTOMER.

More than 100 workers in Amsterdam, New York will lose their jobs in the coming months. One of the city’s manufacturers is closing its doors.

This week, Fiber Glass Industries, Inc. announced that both its Amsterdam plants will close in the next 90 to 120 days.

In a release, FGI Chairman John Menzel, who would not speak about the closure, blamed competition from foreign…

Abraham Lincoln’s funeral train left Washington on April 21, 1865. It would essentially retrace the 1,654 mile route Mr. Lincoln had traveled as president-elect in 1861 (with the deletion of Pittsburgh and Cincinnati and the addition of Chicago). Our particular area oif interest is the the trip through Albany, New York.

In 1865, neither bridge across the Hudson River had been completed yet. So to get from the Hudson River Railroad from New York City, the train had to go North to Troy, cross the Green Island Bridge and back down the West side of the river to Albany.

One of our readers is trying to find out more about a relative who worked as an engineer for the Troy & Schenectady Railroad and has been identified with the Lincoln Funeral Train. funeral train went from Albany to Schenectady on New York Central not T&S.

We have some material…