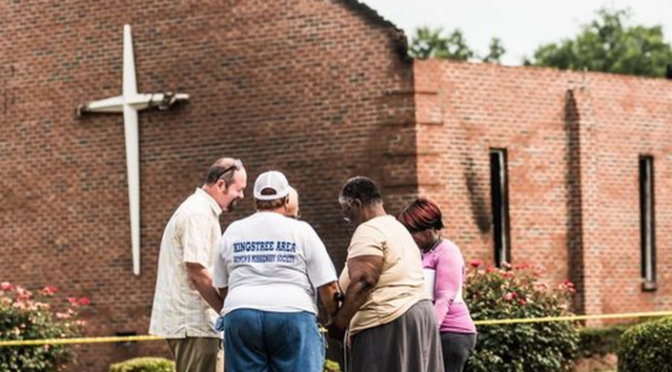 Groups seek to raise hundreds of thousands for southern churches that burned after Charleston shooting: ‘If we don’t stand up … we’re all going to suffer’

ore than a half-dozen black churches have burnt to the ground in the American south since the killing of nine black people inside a historic African American church in Charleston, South Carolina, last month.

Since the shooting, authorities have ruled at least three of the church fires to be arson, with none of those so far being deemed hate crimes. Some leaders of those churches located in Charlotte, North Carolina; Knoxville, Tennessee; and Macon, Georgia, have grown increasingly suspicious of the motives for the recent attacks. And many others, some of whom now face thousands of dollars in repairs, have now begun the slow rebuilding of their sanctuaries.

In the wake of those arsons, dozens of religious institutions and nonprofits have raised cash for those churches. To the surprise of some pastors, the recovery effort is being partially led by Jewish and Muslim leaders, who understand both the sanctity of houses of worship and the seriousness of attacks against them.

“If there’s a silver lining, these kinds of incidents draw communities together,” said Christopher Strain, a Florida Atlantic University professor of American studies and author of Burning Faith: Church Arson in the American South. “There’s an unintended effect of bringing people together.”

Faatimah Knight, a 23-year-old black Muslim student, has helped organize a group of Muslim nonprofits including Ummah Wide, the Muslim Anti-Racism Collaborative, and the Arab American Association of New York. With one week left, the crowd-funded campaign has raised more than $58,000 from over 1,300 donors.

Knight says the groups’ online fundraising effort has a current goal of $75,000 and is considering raising that figure to $100,000. Her group, which is considering joining their efforts with the Rebuild the Churches Fund, ultimately wants to establish a long-term relationship with the scorched churches as they begin their own healing processes.

In the wake of the Charleston shooting, which happened on the first night of Ramadan, some members of the Muslim community were also shaken by the attack on another house of worship. Knight fears the trend will continue in what she characterizes as a “very particular history” of racially motivated attacks against black churchgoers. She says the recent underreporting of church attacks had made her feel more vulnerable, as if the safety and security of her own mosque could be threatened.

“It was painful for a lot of people,” Knight says. “It shook the country in a lot of ways. Especially for black people, it’s extra personal given that these were in a black church, a place where you expect to be safe. If churches burn down, there’s a void where God’s name isn’t being mentioned.”

Rabbi Susan Talve, who heads the Central Reform Congregation in St Louis, Missouri, says a broad coalition of more 150 religious institutions has raised more than $150,000 toward its $250,000 goal to help rebuild black churches. She says the groups involved with the Rebuild the Churches Fund began working together after the death of unarmed black teenager Michael Brown in Ferguson.

When the southern black churches went up in flames, Talve says, the group quickly tapped into an established network of rabbis who lived near the communities affected by arson. Within 48 hours after the arsons, the group’s members had connected with those churches’ respective pastors.

According to Talve, every dollar raised will go directly to at least three burnt churches, with more being added to the list should investigators say arson led to their destruction. With insurance companies helping rebuild some sanctuaries, she says, a sizeable portion of the fund will help replace the things probably not insured including new prayer books or choir robes. The fund could also pay for security improvements to prevent future attacks at those churches.

Talve, pointing to the 2014 fatal shootings of two people at a Jewish community center in Kansas City, Missouri, says people of Jewish faith have long experienced the vulnerability that comes with being a target of hate and violence. Following the events of Ferguson and now Charleston, she says, it’s time to fight racism by supporting other religious institutions in their greatest times of need.

“Hate is hate whenever you see it,” Talve says. “This has been a time for us to show that, as allies, we understand that if we don’t all work together to end hate – racism, antisemitism, homophobia, Islamophobia – and if we don’t stand up when it happens, then we’re all going to suffer.” 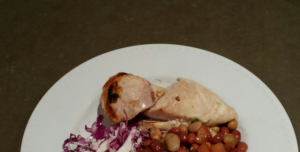 I created this marinade when I was thinking of what I wanted for dinner and couldn’t decide between a lemon and herb chicken breast or something with a little kick of chilli. My inspiration was obviously from Nandos famous Portuguese chicken (although my version tastes different to the bottles you can buy but the spirit is there).

The thing that I love about this marinade is that once you have made it, you can put it on chicken, pork, fish or even add a little bit of it in a stir fry of vegetables while cooking!

If there is one thing I am constantly thinking about it is pizza… I mean traveling. I am forever looking up flights to places and dreaming of where I want to go next. Texas is my home but I always want to be somewhere different exploring the world. It was very hard to come up with my top ten places because I want to go everywhere. I don’t discriminate… I want to experience this entire world… the good and the bad. Mainly because I love finding the good in anything. Put me in the hood or put me in a five star hotel I will make the best of it. These are in no particular order except number one. NO PEEKING! Here are my top ten places:

10. Greece – I know this is a very cliche country to visit. It is on most women’s travel list. I typically travel…

On the authority of Abdullah ibn Umar (RadhiyAllahu ‘anhuma), who said: The Messenger of Allah (SallaAllahu ‘alayhi wasallam) took me by the shoulder and said,

“Be in this world as though you were a stranger or a wayfarer.”

Hello, I’m Carol’s brother, Walter. You probably know me already. I’ve been thinking about a lot of things lately and find myself getting a little down. Mostly I can’t figure out why it is that humans love cats so much more than dogs? Carol has a blog and humans actually read it. Have you really thought about that, dear human?!

Just a few internet searches and one quickly sees that cats are everywhere. An article in The Guardian says that cats are more popular because dogs “are trying too hard.” The article went on to say that dogs are “desperately trying to impress you – longing for your validation and approval,” whereas cats’ behavior is “cool, and effortless, and devoid of any concern about what you might think.”

Am I trying too hard? What will it take to get you to like me more than Carol?

Do you see what I…