Readers, another great reblog from Ghosts and Ghouls about the ghosts aboard the Queen Mary! I myself know people who’ve seen eerie things there!  Read on!

On May 27, 1936, the RMS Queen Mary set sail from Southampton, England, completing her maiden voyage in New York just a few days later. For the next three years, the ship was the height of luxury, transporting such notable passengers as Clark Cable, Bob Hope, Elizabeth Taylor, and Winston Churchill. Its elaborate facilities included…

via Ghosts of the Queen Mary — Ghosts and Ghouls

For more ghosts and other scary stuff, please see: https://www.amazon.com/Jan-Olandese/e/B071FK9L75 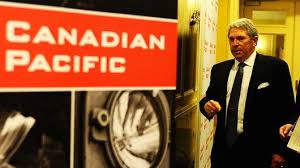 Collected from MANY sources

“Hunter is a legendary railroader, and for good reason,” Lee Klaskow, a Bloomberg Intelligence analyst, said in a 2017 interview. “The Canadian railroads have some of the lowest operating ratios, which is driven by his philosophy — precision railroading. He wrote the playbook on efficiency.”

In his 2005 book, “How We Work and Why: Running a Precision Railroad,” Harrison laid out his core principles for running a rail carrier: service, cost control, asset utilization, safety and people. The volume is still required reading for anyone getting into the industry.

“This book is about running the best damn railroad in the business,” he wrote. “Run a tight ship, and you can expect a reasonable return; manage it badly, and the sheer weight of assets will sink you.”

In his four-and-a-half years as CEO of Canadian Pacific, Harrison transformed the carrier from the worst-performing major North American railroad…